We spend a lot of money on buying a car. This is no surprise. A friend from Denso – a very important company in the Toyota group – once told me that a car contains around 55,000 different parts. So it should be expensive.

So what is lubrication all about? Oil. The quality and endurance of lubrication oil costs us, or saves us, money.

Until recently lubricant oils were largely a mystery to an uneducated driver like me. I had a vague notion that you can buy normal oil for your car, or buy expensive oil. Quite what the difference is I had no idea, until I sat down with Mr Hideo Takegawa in Fukuoka, Japan. This man knows his oils like a samurai knows his swords. He works for a company called D1 Chemical that makes an oil additive called SOD-1 Plus. Magic stuff, it is.

Hideo Takegawa of D1 Chemical Co and the author in Fukuoka

First, Takegawa-san explained the most basic thing: an engine lubricant oil is made up as follows:

The base oil usually comes from mineral oil – crude oil – and the additives are chemicals that do various things such as:

And so forth. This sounds absolutely fabulous. What more could you want? You just put in the engine oil and off you go, not a care in the world. Sorry, said Takegawa-san, you’re wrong. Listen up: cheap lubricant oil is cheap because it doesn’t really work so well. The magic additives and the base oil soon lose their potency after a few thousand kilometres of driving, especially in extreme weather.

Let’s have a look at the base oil. As with everything – like whisky or sake, for example – there’s a spectrum of quality and cost. Lubricant oils are graded as follows:

The base oil can be made from any of these grades, and you pay accordingly for the quality of lubrication. So always use an expensive oil? Not necessarily. Synthetic oils – made by chemical reaction rather than refined from crude oil – have superior lubrication qualities. Jet engines are the hottest, most high pressure engines. They need ester-based lubricants to operate safely. If a jet engine suffers faulty lubrication, a lot of people may die. Jet engine lubrication is the gold standard. Read more about it here in an article on the website Aviation Pros.

To be quite clear, let me say there is nothing wrong with the engine and other lubricant oils made by the oil companies. Some is cheap and some is expensive, depending on the quality. But with more knowledge of your own you can do better by extending the life of your usual lubricant oil. Sure, no oil company favours lower sales of their lubricant oils. They’re in the business of selling us more oil, not less. But we have the chance to educate ourselves and save money, that’s our right as consumers. Likewise, extending the life of second-hand cars by boosting lubrication is just plain common sense.

So why is an ester-based additive so good? It’s called polarity. This is basic chemistry. Ester oils stick to metal surfaces, unlike mineral oils. In chemistry terms sticking to metal surfaces is called adsorption. From Wikipedia:

“Adsorption is the adhesion of atoms, ions, or molecules from a gas, liquid, or dissolved solid to a surface. This process creates a film of the adsorbate on the surface of the adsorbent.” 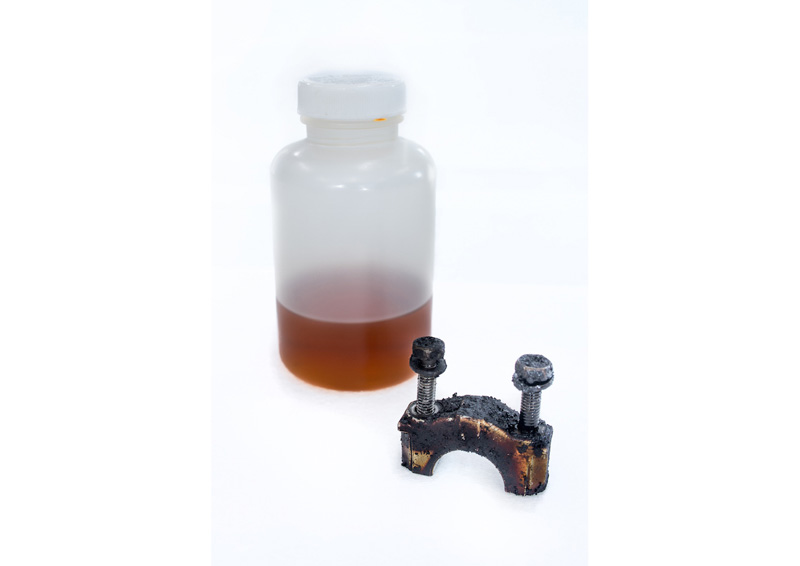 A sample of SOD-1 Plus, made from esters, with a dirty engine part. Esters clean away sludge as well as provide enhanced lubrication.

At really high temperatures, such as in a jet engine or a racing car engine, you need something extra to stick to the metal surfaces. That’s why an ester oil is necessary. Mineral oil is volatile, meaning it tends to evaporate at high temperatures. Esters reduce such volatility in a base oil. That means the ester oil hangs around within the important parts of your car when the base oil begins to lose its potency.

Let’s consider extreme weather and your car. In really hot weather lubricant oil thins out, like cooking oil in a fry pan. In technical terms we say it loses its viscosity. When this happens friction and wear in the engine, transmission, and gear mechanism increases. If you add some ester oil to your existing oil – say 10% – it boosts the overall viscosity and maintains effective lubrication in your car in the very hot weather so your car doesn’t deteriorate if you’re moving around in summer in Texas, Australia, Africa, the Middle East, or the Mediterranean region to name a few very hot places.

In very cold weather when a car is started the lubricant oil takes time to circulate and bring lubrication of the metal surfaces up to an effective level to protect the car. Before this happens the metal surfaces suffer damage. It’s called a dry start or a cold cranking start. This shortens the life of your car. Low temperature fluidity is not always easy to achieve for engine oils. Not that you should flee Canada, the northern states of the U.S., Scandinavia, Scotland, or Hokkaido. These are fine places, and car owners in these climates deserve better than to have their precious cars slowly degraded by dry starts.

But, if you have an ester-based additive in your car there is already a film of oil sticking to the metal surfaces (adsorption, remember?), so when you start the engine in freezing temperatures the metal surfaces are already lubricated. No cold dry start. No degradation. Funny the oil companies forgot to tell you that, too. They would rather you buy winter oil, which costs you more and makes them their money.

Engine noise comes from friction, so a noisy engine is an engine slowly destroying itself. If you add an ester-based oil to your existing lubricant oil the engine noise suddenly decreases. Why? Because the lubrication is suddenly better. This happened to me. After Takegawa-san had SOD-1 Plus added to my 2003 Toyota Landcruiser the engine noise dramatically fell. I was astonished. And with the SOD-1 Plus in the power steering fluid as well it felt like driving a Rolls-Royce. I was utterly convinced of the power of esters.

Now esters are not simple things. They come in all sorts, and without obtaining a degree in chemistry – as admirable as that may be – I learned that you divide them into various kinds: polyol esters (POE), diesters (DST), and vegetable oil-based esters (VOE) for example. Jet engine lubricant oils often use a combination of all three. According to Takegawa-san SOD-1 Plus is made up of all three, a combination figured out by Professor Takashi Watanabe of Kurume Institute of Technology. Prof. Watanabe is one of Japan’s most senior tribology scientists, tribology being the science of lubrication.

Some oil companies such as Millers Oils in the UK make a triple ester oil for racing cars. Why? Because racing car engines run at much higher temperatures and pressure than your average car.

So let’s break free. Consumer education means liberating our cars and treating them with real care so they last longer and don’t break down. After all, it’s our money. An ester-based additive in your car means taking control of your driving future. Takegawa-san and his colleagues helped me do that with their SOD-1 Plus.

For those interested in aircraft engine lubrication here is a great article on the subject from Aviation Pros.